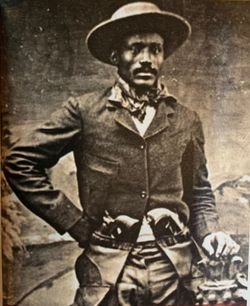 Born in Texas just prior to the Civil War, George McJunkin found his stride as a cowboy in the west, eventually settling in and around Folsom in the Territory of New Mexico. A self made man who taught himself to read and write in both Spanish and English, numerous musical instruments, ultimately became one of the most important amateur archaeologists of New Mexico after his discovery of the Folsom Point inside a washed out arroyo just outside of Folsom, New Mexico, after a massive flood on August 27, 1908.

Mr. McJunkin died on January 21, 1922, and is buried in the cemetery at Folsom, New Mexico.

George McJunkin
George McJunkin is one of the most important archeologists in New Mexico history.
By themanofenchantment
On Aug 27, 2022
View all stories